Why did you choose to write in your particular field or genre?

I came out of background of writing urban fantasy, which is a bit of a muddled genre, having various degrees of romance. So much so, that often times UF series got confused with paranormal romance, and vice versa. But my books were very much UF, light on the romance. I just didn’t identify that frequently with the heroines of romance novels, and I often hated how they would simply give in to what the hero wanted.

Around the same time, I was falling in love with M/M romance as a reader. My very first was a KA Mitchell novel, and I loved it. I had no idea that it was an actual, thriving romance genre, and I dove in. I also discovered a deep love for Kish (the Fish/Kyle romance on cancelled soap “One Life to Live”) and started writing fanfic for those characters. I got great feedback on those stories, and one day it occurred to me to write my own original stories.

I wish I knew. As far back as I can remember, books have been a part of my life. From the earliest hardback readers to the illustrated Disney books. Then early readers, middle grade series like Babysitter’s Club and Sweet Valley Twins. I love reading. I love getting lost in other people’s lives. Probably because I’m an incredibly introverted person, and I don’t have many big adventures in my own life. Somehow my love of reading stories translated into sitting down and writing my own.

How long have you been writing?

I suppose I’ve been writing fiction since I was twelve years old, so about twenty-four years now. My first story was awful. A dreadful mess, and it’s since disappeared from my life. But all through junior high and high school, I scribbled down stories. Then I graduated to my mom’s typewriter. I didn’t get serious about writing as a career until college, when I had a professional in the field compliment my work and say he thought I could make a real go of it.

I’m so glad I listened to him.

What do you think most characterizes your writing?

I had a reader very recently say something to me on Facebook that has kind of become my brand: Angsty, without making you want to die. I like to tell stories about real people. People you meet on the street (a bartender, a landscaper, a receptionist at a dentist’s office) who are struggling with very real problems (homelessness, alcohol abuse, drug problems, domestic violence), but who find a happy ending and love.

What was the hardest part of writing this book?

The musical aspect of it. My editor and I came up with the idea of doing a series around musicians. Personally? I can play the MASH theme on the piano, and that’s it. So I had to do a lot of research around indie rock, music festivals, and different instruments. I even bought “The Complete Idiot’s Guide to Music Theory” so I didn’t sound completely idiotic in my storytelling.

What did you enjoy most about writing this book?

Dominic Bounds. He was one of those rare characters who started telling me life story almost from the very first moment I dreamed him up. He came out fully formed, with a rich family history, and a lot of personal baggage that had to be sorted through before he and Trey could ever work. I adore Dom so much, and it was a pleasure giving him his HEA.

Are there underrepresented groups or ideas featured if your book?  If so, discuss them.

Interracial adoption is something that is featured in this book, via Dominic’s family. Dom is half-Filipino and half-Italian, and his adoptive parents are black. He has a Latino adopted sister, a white adopted sister (who is also autistic), and two other black adopted siblings. Interracial adoption isn’t something I read about very often in fiction, and I enjoyed creating a family that is not only functional, but also very loyal and loving to each other. When one of them is hurting, they all rally to support them.

Are you a full-time or part-time writer?  How does that affect your writing?

As of January this year, I am a full-time writer. I was able to leave my full-time day job, and now I work there a few times a month to get out of the house on a regular basis. I’m a single, mostly healthy person, so I only have to support myself and two precocious cats. In regards to how it’s affected my writing, I was just looking at my monthly writing stats today. Some months I hit my target, some months I missed it, but on average I’m doing well. I’m not the most organized person, and getting myself onto a proper schedule has been haphazard. It also doesn’t help that my family seems to think I do nothing all day, so I’m available to them at their whim.

A little bit of everything, to be honest. Definitely MM romance. Sometimes I go on sprees, like last month when I binged on MM shifter romances. I also love nonfiction, especially about topics important to me, such as youth homelessness and poverty. Biographies when I’m in the mood. And books about nutrition/the processed foods industry.

What do your plans for future projects include?

I love this question. So besides completing two contracts (All Saints #3 and Body Rocks #3), I’m working on a third Cole/Jeremy book for my Discovering Me series. Those two are so stubborn, but I’m slowly coaxing a story out of them. I’m also working on a shifter story that begins with hot and heavy motel sex, so that one should be pretty spicy. There will be a third Prodigal-universe story, to add to Prodigal and Frozen, which I plan to self-publish. I won’t be bored.

What question do you wish that someone would ask about your book, but nobody has? Write it out here, then answer it.

Q: How did you come up with the names of the two rival bands in “Body Rocks?”

A: The first band name, Fading Daze, just sort of came out of nowhere. I liked that it sounded like fading days, and it fit Trey’s group of friends. The second band, XYZ, I had more trouble naming. I couldn’t think of anything that I liked when it was time to start writing the first draft, so I used XYZ as a placeholder. By the time I got to the end of the book, I was so used to calling them XYZ that the name stuck.

Is there one subject you would never write about as an author? What is it?

If you had a superpower, what would it be?

Where is one place you want to visit that you haven’t been before?

Germany. I’m a little bit more than half German, so it would be wonderful to visit that country  one day. Plus, I work with a woman who was born there, and I love listening to her talk about how much she loves it. It’s also a beautiful country (I’ve seen pictures), with a deep cultural history.

If you could have any accents from anywhere in the world, what would you choose

Australian. And yes, I know even Aussie accents vary from region to region, but I love listening to them talk. I watched an Australian soap on Hulu.com last year, called “All Saints,” and it was wonderful listening to them hour after hour. Once in a while an American character would appear, and it would totally throw me out of the show!

No stranger to the writing world, A.M. Arthur has been creating stories in her head since she was a child and scribbling them down nearly as long. She credits an early fascination with male friendships and “bromance” (and “The Young Riders”) with her later discovery of and subsequent affair with m/m romance stories. When not writing, she can be found in her kitchen, pretending she’s an amateur chef and trying to not poison herself or others with her cuisine experiments. Visit her online at amarthur.blogspot.com 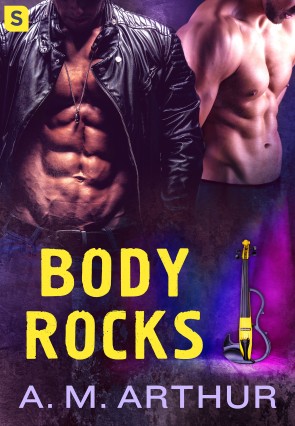 Everything is finally falling into place for Trey Cooper: his band has been accepted into one of the biggest music competitions in the country…too bad their drummer just quit to play with XYZ, their biggest rival. When Trey has a mind-blowingly hot hookup with a mysterious violinist, Trey definitely plans to see him again – just not on stage as a member of XYZ.

Dominic Bounds’ time to make his musical dreams come true is running out. If something doesn’t happen fast, he has to head home to find a real job. This competition is his last chance, and Dom needs to come out on top – but he never expected to fall for his rival. As Dom and Trey risk everything to begin a secret affair, there’s no denying their chemistry is off the charts – but could their band rivalry turn their romance into a one-hit wonder?