Hell to Pay (What Doesn’t Kill You, #7): An Emily Romantic Mystery

USA Best Book Award-Winning Series, Cross Genre Fiction. A heartfelt mystery from the bestselling and award-winning author of the What Doesn’t Kill You romantic mystery series.

Big-haired paralegal and former rodeo queen Emily has her life back on track. Her adoption of Betsy seems like a done deal, her parents have reunited, and she’s engaged to her sexy boss Jack. Then client Phil Escalante’s childhood buddy Dennis drops dead, face first into a penis cake at the adult novelty store Phil owns with his fiancée Nadine, one of Emily’s best friends. The cops charge Phil with murder right on the heels of his acquittal in a trial for burglarizing the Mighty is His Word church offices. Emily’s nemesis ADA Melinda Stafford claims a witness overheard Phil fighting with Dennis over a woman. Before he can mount a defense, Phil falls into a diabetic coma, leaving Nadine shaken and terrified. Meanwhile Betsy’s ultra-religious foster parents apply to adopt her, and Jack starts acting weird and evasive. Emily feels like a calf out of a chute, pulled between the ropes of the header and the heeler, as she fights to help Phil and Nadine without losing Betsy and Jack.

Emily is a disgraced paralegal and former rodeo queen who tucks tail and moves back to her hometown in West Texas when her Dallas husband leaves her for a woman who turns out to be a man. She works for Jack, a secretive criminal attorney and sexy mix of cowboy and Indian, and is trying to adopt a six-year old little girl from Mexico. Emily flounders a bit through her divorce, miscarriage, local gossip, adoption woes, and romantic ups and downs, but she has the love and support of the world’s best friends: CPS Investigator Wallace, strip club bartender Nadine, her former boss Katie who left the practice of law to move to the islands, sexy fish-out-of-water Ava, and tough-as-nails Michele. And when the chips are down, Emily is resourceful, a little bit spiritual, and a whole lot reckless, as she kicks ass and takes names.

How did you first meet your writer? I met Pamela when she was writing about my best friend, Katie, in Saving Grace, the first book in the What Doesn’t Kill You series.

What do you like to do when you are not being actively read somewhere? My idea of heaven is riding Jack’s horse Jarhead on a gorgeous spring day in the mountains of New Mexico.

What impression do you make on people when they first meet you? How about after they’ve known you for a while? I hate to admit it, but I think people think I’m a dumb blonde. But after they know me, I think they get me, and see that I’m capable. I think I actually surprise them, but mostly because they don’t imagine me as someone who can rope, ride, and shoot.What’s the worst thing that’s happened in your life? What did you learn from it? When my daddy left us. That was the worst. My divorce was bad, and my miscarriage was horrible. But wondering if my daddy was even alive, if I’d ever see him again? Losing my hero? That was the worst. It really taught me to rely on myself, though. I knew that nothing was necessarily forever. Tell us about your best friend. Well, my best friend ever is Katie, who used to be my boss. I soaked a lot of her tipsy tears into my shoulder, let me tell you. She’s got it together now, but she lives so far away on St. Marcos in the Virgin Islands. My local best friend is Wallace, and oh-my-

God he’s hilarious. He’s got this giant heart for kids—he works as an Investigator for Child Protective Services—and an obsession for neatness. But bless his heart, he’s a single gay man in Amarillo, so he’s as much of an outcast as I am as the divorcee whose husband left her for a woman who turned out to be a man. What are you most afraid of?

That I’ll end up alone, without Betsy or Jack.What do you like best about Jack? Least?

I love Jack’s eyes and his enormous heart. I like least that he is cryptic and secretive. I wish I could get him to just open up to me.

If your story were a movie, who would play you?

Kate Hudson would be my top choice, but Reese Witherspoon could pull it off, too.

Describe the town where you live.

Amarillo: flat, windy, smells like cow poop, and a church on every block.

Describe an average day in your life.

Since I’ve been working for Jack, there’s been nothing but chaos. I’ve been drugged, kidnapped, shot at, stalked, and had to escape with Betsy on horseback from a human trafficker’s ranch and save two foster kids from a bad cop in an abandoned mine. I’m not sure there are even average days anymore.

What makes you stand out from any other characters in your genre?

I think readers will find that out in Hell to Pay, though I cringe to admit that my special skill is snake handling. Don’t ask, because I refuse to say another word about it.

Will you encourage your author to write a sequel?

I hope she writes about my dear new friend Laura. She was a champion jockey, and she and her husband are adopting a teenage girl. But she wants to start an equi-therapy camp for kids on Jack’s ranch. She’s asked me to help her, and I think it’s the greatest idea ever. 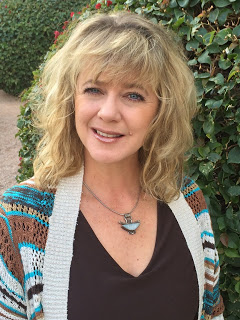 g, award-winning What Doesn’t Kill You romantic mystery series (WINNER USA Best Book Award, Fiction: Cross Genre) and hilarious nonfiction. She is a recovering attorney and investigator who resides deep in the heart of S/Nowheresville, WY and TX with her household hunks—husband Eric, one-eyed Boston terrier Petey, and house goat Peyton Manning. Pamela has a passion for great writing and smart authorpreneurship as well as taking long walks, experimenting with her Keurig, and traveling in the Bookmobile.
Follow Pamela at http://eepurl.com/lq-bP and get her exclusive free e-book Puppalicious and Beyond. Visit her at http://pamelafaganhutchins.com (where you can discover which of her novels she’s currently offering for free download) or drop her a note pamela at pamelafaganhutchins dot com. And if you would like her to visit your book club, women’s group, writer’s group, or library, all you have to do is ask.